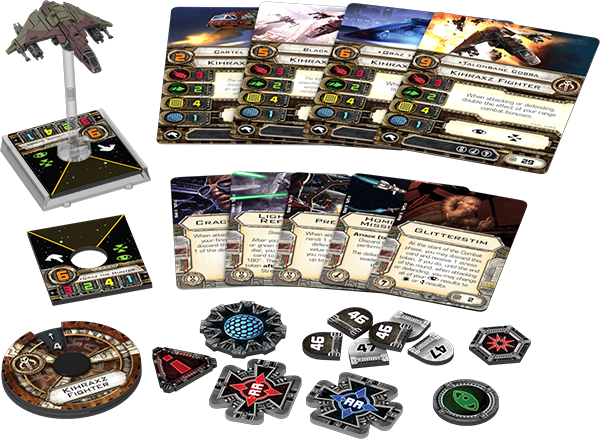 Modeled after Incom’s popular X-wing starfighter, the versatile Kihraxz was developed specifically for the Black Sun crime syndicate, whose highly paid ace pilots demanded a nimble, powerful ship to match their skills. It arrives to X-Wing™ as a well-rounded, small-base, Scum and Villainy starship with three attack, two agility, four hull, and one shield. You gain one of these miniature starfighters in the Kihraxz Fighter Expansion Pack, carefully pre-painted and sculpted at the game’s standard 1/270 scale. Additionally, the Kihraxz Fighter Expansion Pack comes with four ship cards, five upgrades, a maneuver dial, and all the tokens you need to fly this fighter into any battle in which the galaxy’s Scum have a vested interest.

Retrieved from "https://xwing-miniatures.fandom.com/wiki/Kihraxz_Fighter_Expansion_Pack?oldid=53171"
Community content is available under CC-BY-SA unless otherwise noted.