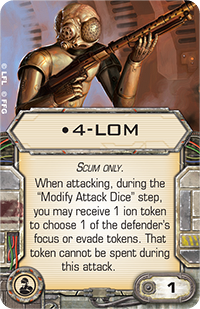 4-LOM was an ambitious LOM-series protocol droid who overrode his programming and became an intergalactic thief and later a bounty hunter. He often worked together with Gand findsman Zuckuss. Following the Battle of Hoth, both 4-LOM and Zuckuss were hired by the Sith Lord known as Darth Vader to capture Han Solo, captain of the Millennium Falcon and hero of the Alliance to Restore the Republic. However, the bounty on the smuggler's head was instead claimed by the infamous Boba Fett.

When attacking, during the "Modify Attack Dice" step, you may receive 1 ion token to choose 1 of the defender's focus or evade tokens. That token cannot be spent during this attack.